After 30 years of agony, disappointment, tears and near misses, Liverpool finally won their first Premier League title and their 19th top-flight title.

When Liverpool won their 18th league title in 1990, it was hard to fathom that they will wait for another 30 years before winning another title as they were the best team in the country then.

According to the BBC, these were the final words of the match reporter for Liverpool Daily Post on the day Liverpool beat QPR to win their 18th league title:

“Liverpool are champions again, and it is difficult to see what will prevent the same words being written again this time next year.”

So it was hard to imagine that the Kop would wait for another 30 years before seeing their team win a top division title.  Not that they haven’t gone close before now. They have gone close a couple of times, especially in 2014 when a Steven Gerrard slip cost them the title.

Nonetheless, after 30 years of disappointment, Jurgen Klopp and his team have finally brought joy to Reds fans worldwide by winning the team’s 19th league title, but the first since Premier League inception.

This is not a win for the red half of Merseyside alone, but also every Liverpool fan worldwide, including Nigeria.

So following Liverpool’s 19th league title, Soccernet takes a look at what was happening in Nigeria in 1990 which was the year they won it last before last night.

Nigeria currently operates a democratic system of government, but before the new Millenium, it was ruled by the Military.

And in 1990, Major General Babangida was the Head of State and President of Armed Forces Ruling Council of Nigeria.

The Niger state born General came into power in 1985 after he led a coup that ousted Major General Buhari who coincidentally is the current President of Nigeria.

Babangida stayed in power for eight years and famously annulled the 1993 general elections, which is widely believed as the only free and fair election Nigeria has held in its history.

Cabin Biscuit Was Still A Thing

Growing up in a lower-income middle-class family in the mid/late 90s, Cabin Biscuit was a replacement for cakes whenever we celebrate birthdays.

Packaged in an attractive small cartoon with two smiling faces of a man and a lady, Cabin Biscuit was indeed a big deal for any child that grew up in the 90s.

It can be eaten alone, sometimes with butter and also dipped into beverages. Although there were other Biscuits in vogue then, none was close to Cabin in terms of popularity.

Before the D’banjs, Wizkids, Davidos and Burnaboys came unto the scene, Afro Juju was a thing in Nigeria back in the early 1990s and mid-90s.

Just a year before 1990, Shina Peters, the founder of Afro Juju, had released his debut album ACE. The album was a hit and went double platinum.

Although it was released in the last year of the 80s, the album was a hit and was popular through the 90s. Some famous songs from the album include Ijo Shina, Afro-Juju and Je Kajo.

The Super Eagles went close at the 1990 Africa Cup of Nations as they finished runners up to host, Algeria.

The campaign got off to a worst possible start, losing 5-1 to the Desert Foxes in their opening game. But they regrouped for the second game and got a much needed three points with a 1-0 win over Egypt.

They backed up the win with another 1-0 win over Ivory Coast in the final group game before seeing off Zambia in the semi-finals.

The final was a repeat of the opening group game, and once again it was Algeria that came out on top, although this time Nigeria kept the scoreline respectable, losing 1-0. 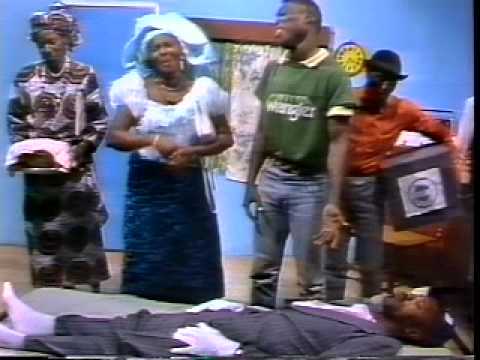 Basi and Company was a sitcom written by the late Ken Saro Wiwa, and it aired on Nigeria’s national television between 1986-1990.

It was filmed in Enugu and is widely regarded as one of Africa’s most popular shows on television. According to Wiki, an estimated 30 million people watched the show at its peak.

Ken Saro Wiwa, an environmental activist, wrote and produced the show. He would later be executed by the late General Sani Abacha administration.