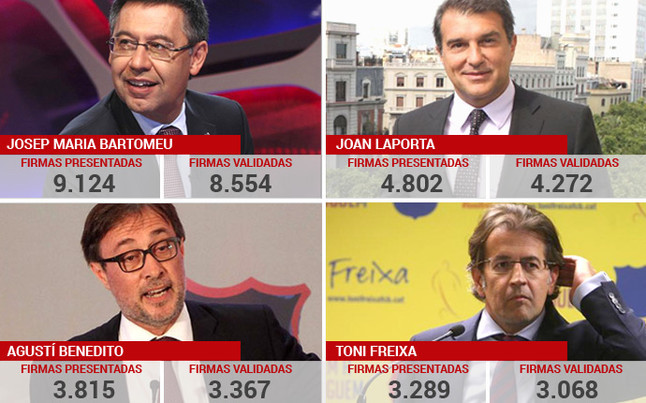 Josep Maria Bartomeu, Joan Laporta, Agustí Benedito and Toni Freixa are the four candidates that will officially run to be Barcelona’s president, after an official announcement made by electoral board president Rafael Herrera on Wednesday morning.

The final result of this process, with the exact number of valid signatures was released after removing ballots deemed void, or duplicated. Thus, of the five candidates that made it for the presidency, only four candidates got the required 2,534 signatures necessary to run during the elections.

Seguiment FCB led by Joan Batiste – presented 2,734 signatures after Monday’s count, unfortunately, they had only 2,518 valid ones, 16 less than they needed to make the cut.

“The electoral board regrets that one of the pre-candidates (Seguiment FCB) had 16 signatures less than needed to make the cut. So we counted the ballot three times and on each time it confirmed this situation.” Herrera explained.

The elections have entered a heat-up stage. In less than two weeks, Barcelona fans will already know who their new President is. July 18 is the date.